The film picks up from where In the Mood for Love left off. It is a variation on the number 2046, because in 2046 the transitional period will come to an end and Hong Kong will again be dependent on China. Chow is writing a novel which takes place on a train heading to this year. All the passengers long to return into their reminiscences of old times because that is the only place not affected by any changes. The film is a romantic sci-fi comedy with slight political vertones. Last year it was nominated for the Palme d´Or. 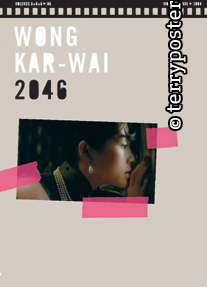