Seven respected directors were each asked to shoot a short film set in the Cuban capital, Havana. The resulting omnibus captures, in contrasting styles and perspectives, the fascinating atmosphere of the city over a period of seven days. Benicio Del Toro follows an American tourist on his first visit to Cuba. Pablo Trapero gives us a story about a famous film director who strikes up a friendship with his Cuban driver. In Julio Medem’s love triangle, a singer must decide between her partner and a passionate Spaniard. Elia Suleiman’s film is about a Palestinian man waiting all day for a meeting with an ambassador, while Gaspar Noé depicts the ritual casting out of the devil from the body of a lesbian girl. Juan Carlos Tabío focuses on a mother trying to support her family; and Laurent Cantet gives us a portrait of an old woman whose actions are guided by visions of the Virgin Mary. 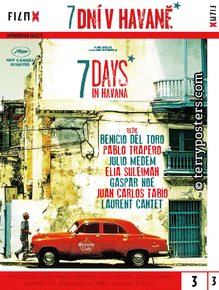