Cowboy, Indian and Horse live in a town called Panic, sharing a house across from their neighbors, Steven, the farmer, and his wife Jeanine. The inseparable threesome have all kinds of bizarre adventures which take them, among other places, to the centre of the Earth, the frozen tundra and to a parallel underwater universe inhabited by dishonest creatures with pointy heads. Our heroes are the plastic figures remembered from our childhood whom the inseparable Belgian animating duo bring to life using stop-motion techniques. This eccentric comic charade full of polished, disarming gags, which also draws on the Surrealist legacy, offers an animated spectacle par excellence that literally overwhelmed audiences at the recent Cannes film festival. The feature-length version describing the irresistible antics of the plastic protagonists, which took two years to complete, is based on the award-winning, twenty-part cult television series. 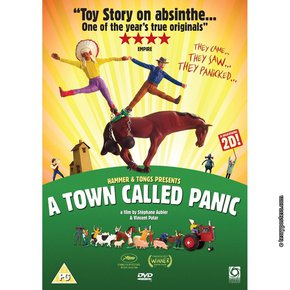