All About My Mother 0+

Pedro Almodóvar's legendary film, awarded an Oscar for Best Foreign Language Film, is celebrating its eighteenth birthday this year. The main character of the intricate story is Manuela, a nurse who returns home to Barcelona after her son´s tragic death to find her ex-husband, the transsexual Lola. In this iconic queer film, Almodóvar skilfully intertwines typical Hollywood patterns with traditional European skepticism and irony, resulting in a powerful auteur vision. Almodóvar had been the enfant terrible of Spanish cinema up to that point, but this film built his prestigious international reputation. Almodóvar also offered major acting opportunities to his favourite actresses: Cecilia Roth, Marise Paredes and especially Penélope Cruz, whose character of the pregnant nun Rosa served as a starting point for her subsequent roles in Hollywood. One of the most beautiful tributes to female protagonists, and you should definitely see it again. 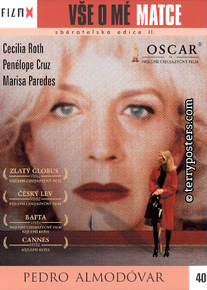