This film is a cartoon aaptation of George Orwell's parable expressing the founding of the USSR and the reign of Stalin. The animals are tired of being under the cruel hand of Farmer Jones (Czar Nicholas II), so Old Major (V.I. Lenin), a pig, leads a meeting declaring that man is their enemy. But when Major dies, the animals lead a successful revolt against Farmer Jones, and the animals rename Manor Farm "Animal Farm" and have their own laws. Snowball (Leon Trotsky) becomes the first president, but Napoleon (Joseph Stalin) oust him, and Napoleon and his accomplice, Squealer (propagandist) break countless rules, use TV as propaganda to warp the animals' minds, and even side with the humans! And the rules are changed, showing that all animals are equal, but some are more equal than others. Will the animals stop Napoleon, or will his downfall be soon. 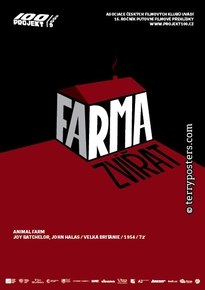