Entombed for 200 years after betraying vengeful witch Angelique Bouchard (Eva Green), 18th century vampire Barnabas Collins (Johnny Depp) returns to Collinwood Manor in 1972, only to find his estate in ruins and his family plagued by macabre secrets in Tim Burton's reboot of the popular supernatural soap opera. It was the year 1752 when Barnabas Collins' parents attempted to elude a family curse by fleeing from England to America. Twenty years later, wealthy Barnabas was the master of Collinwood Manor, and one of the most powerful figures in Collinsport, ME. But Barnabas' playboy lifestyle would soon catch up with him when he casts aside a beautiful yet vengeful witch named Angelique, who subsequently transformed him into a vampire, and then cruelly sealed him in a lonely tomb. Flash forward to the year 1972, when Barnabas is released from his burial chamber. Returning home to Collinwood Manor, Barnabas is horrified to find his ancestral home in a wretched state of decay, and his descendants plagued by macabre secrets. Distressed by the tragedy that has befallen her family, determined matriarch Elizabeth Collins Stoddard (Michelle Pfeiffer) employs live-in psychiatrist Dr. Julia Hoffman (Helena Bonham Carter) to try and solve their many problems. But the more time Dr. Hoffman spends with the Collins' - including Elizabeth's black-sheep brother Roger (Jonny Lee Miller) and headstrong teenage daughter Carolyn Stoddard (Chloe Moretz) - the more apparent it becomes that their problems run far deeper than simple dysfunction. Jackie Earle Haley, Bella Heathcote, and Gulliver McGrath co-star. 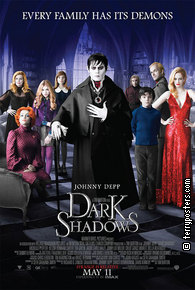 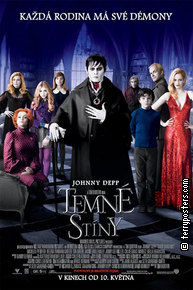