Sometime in the late 1960s, no one is sure exactly when, someone, no one is sure exactly who, let a huge predatory fish called the Nile perch loose in the waters of Africa's Lake Victoria. The voracious fish has since wreaked havoc not only on the ecosystem of the lake itself – it is responsible for the demise of almost all its indigenous fish – it has also had a drastic impact on the lives, and the livelihoods, of local people. Originally mostly farmers, almost all the Tanzanians living near the shores of the lake are now involved in the Nile perch 'industry'. Some work as fishermen, others are employed in processing plants where the fish are carefully filleted to meet European standards. Several times a week, 50 tonnes of Nile perch fillets are loaded onto ex–Soviet cargo planes and flown to Europe, where they are sold for a hefty profit. Nile perch is now Tanzania's biggest export item to the EU. The locals can only afford the rotting fish heads and carcasses that are left behind. Focused on the town of Mwanza, affectionately known as 'Fish City', Darwin's Nightmare is a brilliantly engaging, vivid and intimate documentary that exposes the painful day–to–day realities of a globalized, and yet divided, world. Working with a skeletal crew and undercover much of the time, internationally acclaimed director Hubert Sauper got close not only to the fishermen, but also the children they have abandoned to a life on the streets of Mwanza, as well as the Russian pilots and their motley crews, the local prostitutes that entertain them, the Asian bosses of the fish factories and the EU Commissioners sent to inspect them. As the story unravels, one question keeps cropping up – are the planes that land at the local airport really empty when they arrive, or do they carry an insidious cargo? 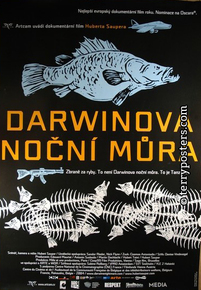