The comedy by Oldřich Lipský and Miloš Macourek is an unusual and daring experiment: the whole plot happens in a retrospective way. The guillotine rises up, the head of the condemned person sis back on his neck, the butcher Bedřich Frydrych comes back to life and recounts his story. The dialogues are played retrospectively which makes them absurd and bizarre. The death becomes the birth… The Czech critique failed to understand the picture Happy End  at the time of its creation, it was however ranked among the ten top sensations of the season by a prestigious journal Variety.

Oldřich Lipský (1924-1986), screenwriter and director. He did not finish his studies of law and philosophy and after his studies he was at first engaged in the theatre. He participated in the founding of the Czech professional Ice Revue. Since 1949 he was working for the Barrandov Film Studios, firstly in variol professions, then since 1954 as an independent director. In one part of his production, he drew inspiration thematically from the circus environment. Oldřich Lipský died when shooting his last film, Great Film Robbery, and the direction was taken over by Zdeněk Podskalský. Oldřich Lipský devoted himself to the production of comedies, often with elements of parody and satire. 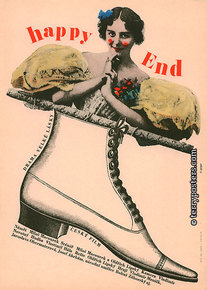